Together for Mental Health: A family’s journey 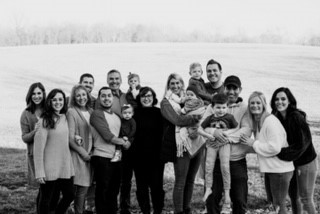 As #MIAW 2021 comes to a close, we want to share with you a story from one of our NAMI Ohio families. The Heck’s have been able to find purpose in the pain of losing their daughter with the creation of the organization 33 Forever, Inc.

The effects of mental illness are felt every day, 365 days a year. Remember with NAMI Ohio, help is available, Reach out today if you or someone you know is struggling to find support.

When Donna and Jeff Heck’s daughter, Danielle Leedy, attempted to take her life the first time when she was 15, the Mansfield couple didn’t know where to turn.

Fortunately, Mary Kay Pierce, head of the National Alliance on Mental Illness Ohio Richland County, was there to help with a shoulder to cry on and resources to help.

In 2019, when Danielle lost her long battle with depression and anxiety, Terry Russell, executive director of NAMI Ohio, helped the Hecks begin a journey no parent ever wants to take.

“NAMI has helped us connect with so many people,” Donna said. “The NAMI Ohio family is so connected and single-minded in mission.”

Donna and Jeff Heck didn’t just cry for their daughter, they bravely forged ahead by establishing 33 Forever  https://33forever.life/   a non-profit group created in Danielle’s memory that is aimed at providing education, support and resources for people struggling with mental illness and suicidal ideas. So far, 33 Forever has raised more than $500,000, mostly from small donations.

Along the way, the Hecks wrestled with issues faced by the 1 in 5 Americans who have serious and persistent mental illness, beginning with the unfortunate stigma attached to the disease.

“Our experience with stigma goes back earlier than just losing her, back to when she was 15 and we felt the embarrassment that she attempted it and was admitted to a lockdown unit,” Jeff said.

“We were afraid somebody would question, ‘How could you not have been watching her?’” Donna said. “Other people throw it back in your face.”

More importantly, the Hecks were worried about Danielle “getting labeled inappropriately at 15 with some diagnoses that would follow her forever,” Jeff said. “We didn’t want people to look at Dani as damaged.” For her part, Danielle certainly felt the stigma of her mental illness and suicide attempt but didn’t openly discuss it with friends.

When Danielle died at the age of 33, the Hecks, their other children, family members, and close friends, vowed immediately to be completely open about Danielle’s suicide, even mentioning it in her obituary.

“Otherwise, suicide wins,” Jeff said about fighting back against stigma. “And we would not let that happen. So we got noisy.”

“We have survivor family members whose loved one took their own life who act like it never happened. They never have talked about out and it’s 15 years later,” Jeff said.

“They will never heal if they can’t face the facts that a disease took my loved one,” Donna added. Depression, anxiety, and body issues were Danielle’s biggest challenges. She responded to all of them with anger, her primary reflex, her parents said.

Among the many supports NAMI provides comes from people with lived experience about how to advocate for your child in the complicated mental health process, the Hecks said.

“Sometimes you just need to fight the system,” Donna said. “When we got in touch with Terry Russell, he told us story after story about people with mental illness. The way he spoke left me with tears running down my face. I knew that passion could save so many people and it could possibly have saved my daughter.”

The couple recently had an opportunity to speak to Gov. Mike DeWine following the Faces of Resilience banquet at The Ohio State University Wexner Medical Center. They came away impressed at the governor’s commitment to mental health.

“He’s clearly not just giving lip service to that effort. He truly believes we’re lagging behind in the mental health system and he’s done a tremendous job freeing up funding,” Donna said

“He relies on NAMI as the advocate for mental illness in Ohio.”

Here is a link to the Hecks being interviewed on a Mansfield TV program.