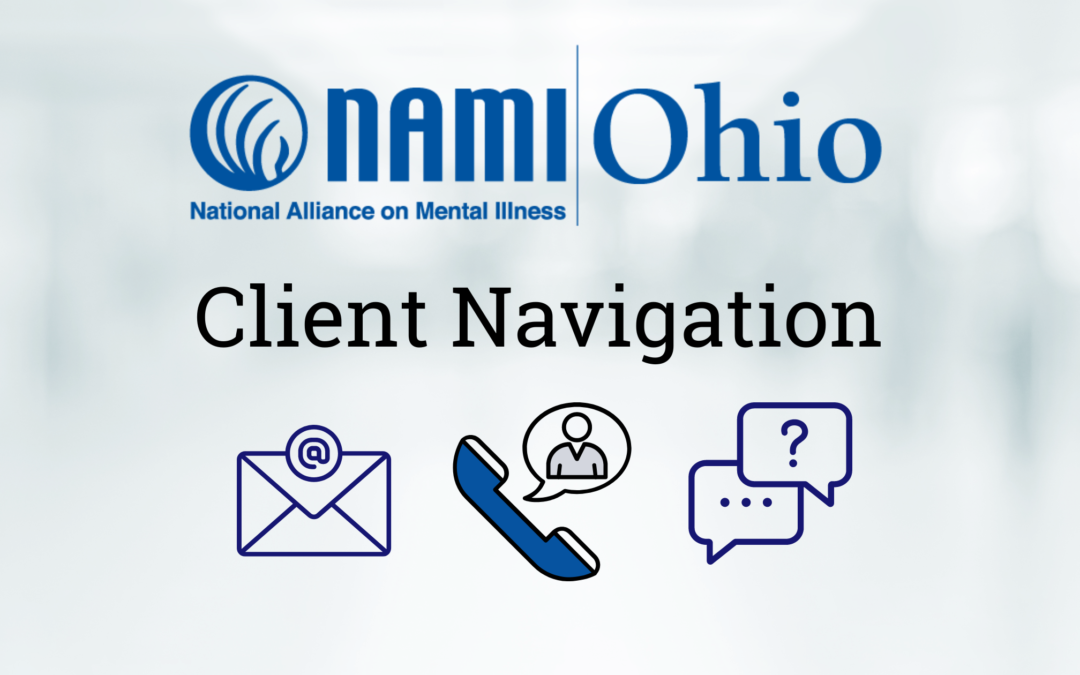 Mary’s sister had been in a Columbus psychiatric hospital for two weeks this past summer, and despite daily calls to the hospital, Mary had been unable to reach the hospital treatment staff.

Not once. In two weeks.

As days passed, Mary, who lives in Marietta, Ohio, 125 miles from Columbus, grew increasingly worried about her sister who had been hospitalized several times in the past to treat her bi-polar disorder.

This time was different, however. Mary’s sister had never suggested suicide before, saying she was “too chicken” to take her own life.

“I’m not chicken anymore,” she told Mary in a phone call from the hospital. She did not feel like she was ready to go home, but the hospital staff planned to release her the next day.

Now fearful, Mary called the Washington County Behavioral Health Board in Marietta where she was referred to the National Alliance on Mental Illness of Ohio Helpline (800 686-2646 or Text NAMI to 741741).

“Danielle helped so much,” Mary said. “She called the hospital and they returned her call right away. The hospital director of treatment called me the next morning.”

As a result of NAMI’s help, Mary’s sister was transferred to a different hospital wing with more intensive counseling where she remained for another 10 days before being released to safely return home.

“I feel so grateful I made that call and that Danielle listened to me actively,” Mary said. “Everything went to plan about what she said after that.”

Mary’s call was one of more than 2,500 contacts to the NAMI Ohio Helpline since March of 2022 when the Client Navigator role was created.

NAMI Ohio Executive Director Luke Russell said the organization “has operated a Help/Referral line for years. We have always wanted people calling to have a real person they could talk with and guide them to the best resource.”

Helpline calls were answered by NAMI’s trained staff, but the duty rotated, with many calls being handled personally by the executive director.

This year, Luke continued, “the need arose for someone with social work and clinical skills to be added to handle the increase in tough calls from individuals and families in serious need of mental health services and supports.”

That resulted in the hiring of Danielle Smart as NAMI Client Navigator and, with it, the formalized, private tracking of calls detailing the problem, actions and results.

“The opportunity to have someone answer and follow up on calls came about with some extra funding from the COVID19 dollars and the NAMI Ohio Board prioritizing this role as we advocate for an increase in care management and coordination for those most in need,” Luke said. “The mission at NAMI Ohio is to educate, advocate and support individuals with mental illness and their families, and the role of the Client Navigator directly supports those we are here to represent.”

Danielle is the main point of contact for those contacting NAMI Ohio seeking services, support, education, housing, and crisis intervention services. Her job includes building strong relationships with NAMI staff and the statewide network of affiliates, 2committing to removing barriers to care by identifying critical resources for individuals and families, assessing needs of callers to NAMI Ohio’s crisis line, and doing follow-ups to see that needed help is being received from local providers and support services.

Danielle was a NAMI Ohio intern from June 2020 to April 2021, and has a decade of experience as a social worker after graduating from Ohio State University with Master’s and Bachelor’s degrees. She is a licensed social worker and a native of Bellefontaine in Logan County, Ohio.

She manages the NAMI Ohio Helpline from 9 a.m. to 5 p.m. weekdays; calls are answered remotely after hours. She also responds to email messages and in-person contacts at events.

Helpline callers can provide as much or as little information as they feel comfortable giving, Danielle said. “My focus is for people to get connected to the resources they need.”

“Sometimes they just need to talk,” Danielle said. “Some of the toughest calls are talking to a parent whose child is going through a mental health crisis. I spend as much time as I need to.”

One person called with concerns about an aging parent. “They love this person so much and they don’t know what to do. The hopelessness and pain can make people feel completely lost.”

Danielle said direct services were the subject of the majority of calls, followed by support assistance, business-related, multiple needs, housing, and crisis calls.

“Being a social worker is a privilege,” Danielle said. “I truly enjoy talking to people…. The best parts are when you’re able to help someone. That’s such a great feeling, like a warm hug. I love when I’m able to solve something for someone that they didn’t know how to do.”

“I like talking to people who are disenfranchised to help them advocate for themselves. Things get better with a quality of care.”

And sometimes, the one who helps others so much needs a helper, too. Danielle said she depends on a personal therapist, family and friends to help keep her balanced as she takes on the burdens of so many others. 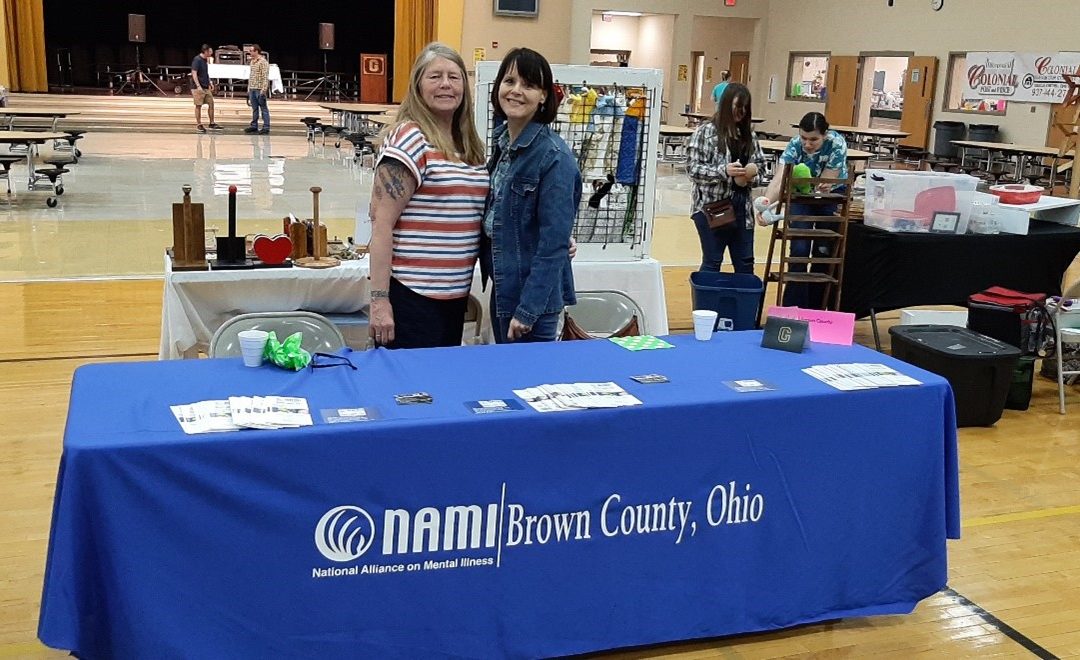 Nothing says spring like the feeling of fresh air blowing through our house on a warm spring day like the afternoon after the Georgetown Community Day at Georgetown Elementary. After two years of isolation, I think everyone was looking for an excuse to get out of the house and be around people again. “Working a booth” was a quiet victory for both Anita and I. Anita and I had met five years earlier when I founded NAMI Brown County. We have been through a lot in the last five years, the death of her son, me being hospitalized three times, COVID, and the war in the Ukraine. As I remarked to Anita in the car, “We are just grateful to be well enough to work a booth”. Welcome to a new chapter in our lives. Watching Anita console a grieving mother with the touch her hand, validated again for me today why I founded NAMI Brown County. “Together, we are making a difference, one day at a time, one life at time.”

My name is Danei Edelen. I am founder of the NAMI Brown County Ohio affiliate. In July, we will be celebrating five years for NAMI Brown County at the Child Focus on July fourteenth. Becoming known in my community as founder of NAMI Brown County brings me a quiet thrill. In April, I spoke at the Brown County Chamber of Commerce luncheon to tell people about the party. I was so nervous, that I could hardly touch my food. A woman from one of our community banks came up to me at our NAMI booth at the Georgetown Community Day and told me I had done a nice job. “Why, thank you!” I said with profound relief.

Part of the reason this party means so much to me is because I have lost two people in my life to suicide as well as having my own suicide attempt. I have lived through that dark night of the soul related to suicidal thoughts. NAMI was a lifesaver for me. I am convinced that if had known about NAMI before, I would have found the help I needed.

Suicide has become an epidemic in this country. Suicide is now the second leading cause of death for people ages 10-34. The 988 Implementation Act, introduced by Congressman Tony Cárdenas, provides federal funding and guidance for states to implement a 988-phone number to replace 911 for mental health crisis calls. The 988 Implementation Act provides funding for a crisis response infrastructure that relies on trained mental health specialists instead of armed law enforcement. NAMI Brown County also has free Zoom calls on the second and fourth Thursday of the month. If you or someone you know is struggling, please know that you are not alone. Anita and I are living proof that there is life after a mental illness diagnosis. 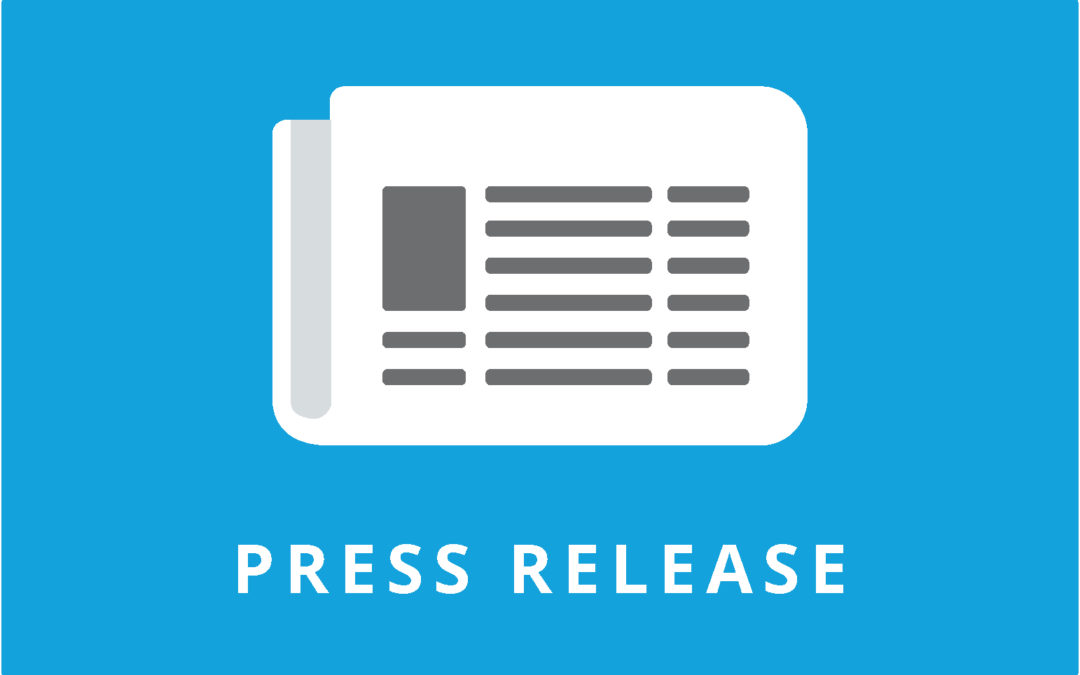 COLUMBUS, OH: Vowing to remedy “unfinished business” from decades ago when thousands of people were released from psychiatric hospitals without adequate treatment, Ohio Gov. Mike DeWine announced a plan to greatly expand community services for those with mental illness.

Gov. DeWine said “tragically” neither the state of Ohio nor other agencies across the nation followed up with the necessary treatment for those who exited hospitals beginning during the administration of President John F. Kennedy. That failure resulted in large numbers of people struggling with untreated mental illness often ending up homeless, filling hospital emergency rooms, or being incarcerated.

The governor’s plan, which will be presented to state lawmakers next year in his budget, will include a “behavioral-health research hub,” an in-depth study of the causes of mental health and addiction issues, and expansion of community services. Cost figures for the proposal were not released.

NAMI Ohio Executive Director Luke Russell said NAMI Ohio, the state’s largest grassroots organization advocating for the mentally ill, their families and caregivers, enthusiastically supports Gov. DeWine’s proposal and applauds his “willingness to be a champion so individuals and families have hope that they will have to no longer live in the shadows.”

“NAMI Ohio stands ready and willing to work with the Governor and State Legislature to prioritize a person-centered approach to mental health treatment that has not been part of the current treatment model,” Russell continued. NAMI Ohio wants to ensure support services such as Housing, Day Services and Client Navigation become a reality for individuals with serious mental illness and their families.

“Every family, workplace and community is impacted by mental illness and the time to challenge the status quo is here,” Russell said. “We appreciate Gov. DeWine’s focus to address a system that was never built when as a nation we decided to close the large psychiatric Institutions. Individuals not only needed the community treatment services, but also support services that give a quality and dignity of life all people deserve.”

The governor outlined his proposal this week at summit sponsored by the Ohio Chamber of Commerce. “We must – we must – change this. We must now make behavioral health visible, accessible, and effective in all communities in Ohio,” he said.

Gov. DeWine also renewed his plan to spend $85 million in COVID19 aid from the federal government to help boost employment for mental health workers and internships.