The Board of Directors and staff of NAMI Ohio is thrilled that Judge Joyce Campbell, NAMI Ohio Board President, has been re-elected to serve on the Board of NAMI National.

NAMI Ohio Executive Director Terry Russell stated, “Judge Campbell’s background as a former police officer, a judge in Butler County, and a tenured member of the NAMI Ohio Board of Directors gives her the expertise to help NAMI grow throughout the country.” 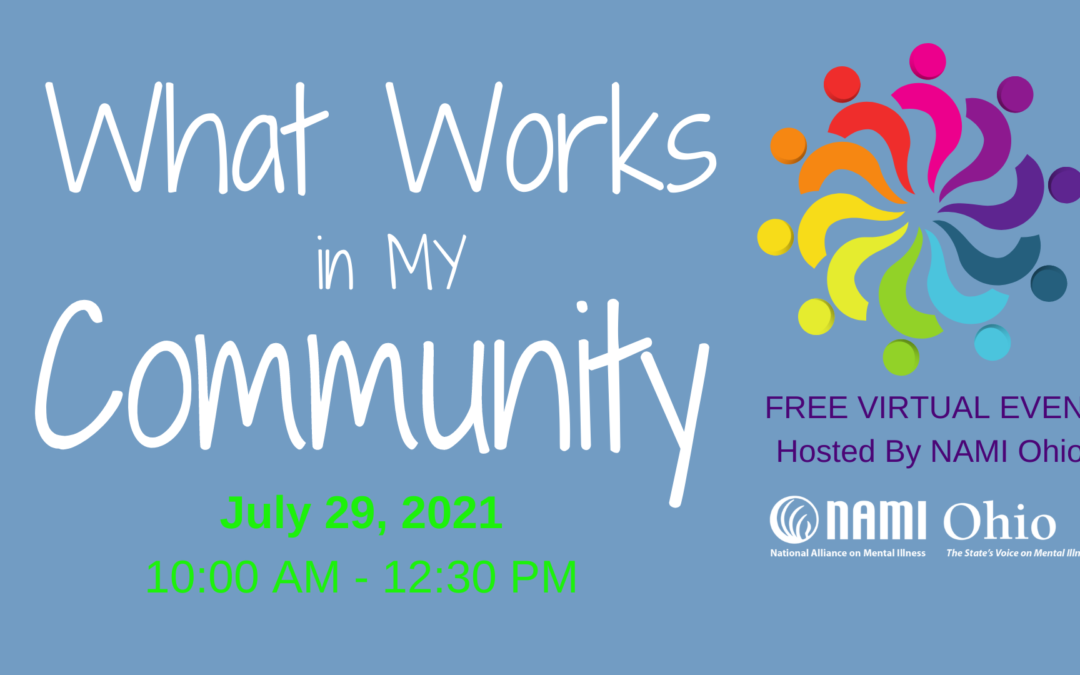 WHAT WORKS IN MY COMMUNITY VIRTUAL EVENT

The event will focus on the services these programs provide, what makes them successful, why culturally competent mental health services are critically important, and a panel discussion with experts and individuals served by the programs.

The National Alliance on Mental Illness for Ohio commends Gov. Mike DeWine and the Ohio General Assembly for their focus in the 2022/2023 State Budget on the continued commitment to the most vulnerable in Ohio – those with serious mental illness.

“The biennial budget signed last night is a huge step forward in moving us to a person-centered approach by investing in care coordination and housing with an enhanced focus on adults with serious mental illness.  Gov. DeWine and Mental Health and Addiction Services Director Lori Criss made good on their promise to help cure the fragmented system of care by providing basic supports within the mental health delivery system,” said Terry Russell, Executive Director of NAMI Ohio.  The $11 million investment to strengthen cross-system collaboration begins to address issues such as continued readmissions into inpatient hospitals, the revolving cycle of repeated incarcerations, and lack of transition as those with serious mental illness seek to live full lives in the community. “Furthermore, NAMI looks forward to working with Governor and the General Assembly to maintain this safety net funding for those with serious mental illness.”

Also, NAMI Ohio applauds the administration’s efforts to improve group homes for those with serious mental illness by a $12 million allocation to improve the quality of these homes. “Help could not come at a better time with limited housing options and a freeze on admissions due to COVID-19. The administration committed a sizable amount of time, energy, and resources to ensure the 700+ group homes had testing, PPEs, and vaccinations,” stated Russell.

The budget is further evidence of the commitment to serve those with severe and persistent mental illness through a focus on community-based supports beyond what the current system is providing. “It shows how Gov. DeWine and Lt .Gov. Jon Husted listened to the cries of individuals and their families we represent,” said Russell.

NAMI Ohio also applauds Gov. DeWine’s veto of a provision in the budget that would have reduced the requirement for individuals with lived experience with mental health issues from serving on county alcohol, drug addiction, and mental health boards. “NAMI Ohio opposed the change included in the budget bill sent to Gov. DeWine because it played into the stigma toward those with mental illness by reducing their voice on local County ADAMH Boards. NAMI Ohio is open to a thorough discussion regarding the role, size of ADAMH Boards, and the type of categories required under the existing law. As the largest consumer and family group in the State, we think more voices of those impacted by serious mental illness is needed, not less.”

For Ohio’s citizens whose lives have been invaded by mental illness, we must be seen no differently than other health care issues. The approved State Budget is another step towards enhancing the quality of life of those living with mental illness and their families.

Law Prohibiting the Execution of People with SPMI – First Case

The first case in Ohio and the nation under a new law prohibiting the execution of people with serious and persistent mental illness has been decided in Franklin County,

Braden will spend the rest of his life in prison with no possibility of parole.

The reason for the action is Braden was diagnosed to have “serious mental illness,” specifically paranoid schizophrenia with delusions when he committed two murders in Columbus in 1998. He was sentenced to death for killing his girlfriend, Denise Roberts, and her father, Ralph Heimlich.

House Bill 136, a new state law long advocated for by the National Alliance for Mental Illness Ohio, was signed by Gov. Mike DeWine on April 12, 2021. The law prevents the state from executing someone who had a persistent mental illness at the time of the crime “that significantly impaired the person’s capacity to exercise rational judgment in relation to the person’s conduct.”

Psychiatrists who examined Braden told the court he was “intimidating, decompensated under stress, and had delusions of being a prophet of God.” He is now being treated in prison with antipsychotic medications.

Ohio is the first state in the U.S. to pass a law banning the execution of the mentally ill. However, similar legislation is pending in other states, including Florida, which is modeling its proposal on Ohio’s law.

Read more about this case on The Columbus Dispatch website at https://www.dispatch.com/story/news/courts/2021/06/24/columbus-murderer-first-inmate-spared-death-penalty-under-new-state-law/5320849001/

NAMI Ohio, “the state’s voice on mental illness,” cannot thank the Ohio Senate enough for approving a 2022/2023 budget that will serve Ohio’s citizens and their families dealing with mental illness.

During the House and Senate budget hearings, changes were made that would have lessened the voice of those living with mental illness and their families. This included muting the voices of families and individuals living with mental illness from community mental health boards. The members of the Ohio Senate heard NAMI Ohio’s plea and removed most of that stigmatizing language.

In addition, Governor DeWine, in his budget, had pledged funding for student wellness. These funds were to be used in schools to address the behavioral problems students may exhibit when returning to the classroom.  The student wellness funds were removed by the House of Representatives but were restored by the Senate. NAMI Ohio wants every elected official to know that this will save lives.

Being a legislator responsible for so many issues is an extremely difficult job. But, during this session, the Senate prioritized the need to help Ohio’s citizens suffering from mental illness. For that, we are extremely grateful.

As this process moves forward, we feel confident that Governor DeWine, the Ohio House of Representatives, and the Ohio Senate will continue to be our heroes.

We want to thank the thousands of NAMI supporters who advocated during this budget process through making phone calls, sending emails, attending meetings, and more.  These actions helped to raise the volume of NAMI’s voice at the Ohio Statehouse.