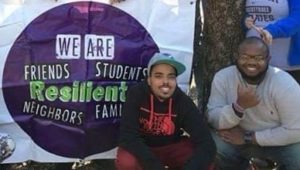 Jerrone Darnell McAdoo prayed he would live to the age of 21, knowing that African-American males with sickle cell anemia often don’t make it that long.

He made it six years past his goal.

Jerrone’s inspiration radiated beyond his years, like cleansing sunshine reflected on dozens of young and older adults in Ohio who admired, respected and loved the strength and resiliency of a young man who packed a hard lifetime of living into 27 too-short years. He was that rare person whose influence goes on long past his life.

Jerrone, a founder of the YouthMOVE State Youth Council, advocate for youth in foster care and champion for the National Alliance on Mental Illness Ohio, died June 4, just a few weeks after his 27th birthday. He left behind a new wife, Chantelle, and Jeremiah, a five-year-old son from a prior relationship.

“Despite all his challenges and a multitude of barriers, Jerrone never complained. He was always grateful and put God first.  He was a dad, husband, advocate, and inspiration to all who knew him,” said Angela Lariviere, director of YouthMOVE for NAMI Ohio. “We cannot forget that he taught us all to be strong, grateful and most of all RESILIENT. As we grieve for now, we will persevere and carry on his legacy knowing that we and the world are better because of him! Our hearts are broken but we know he is finally at peace and without pain.  We are comforted knowing he has taken his well-earned spot among the Angels watching over us.”

Chantelle McAdoo, who is 24, is still grieving the loss of the man whom she met at Christmas time just three years ago. She was introduced by Doris Pickett, who worked at daycare where Chantelle was employed and Jerrone’s nephew attended. Jerrone and Chantelle immediately had something in common since both had been in foster care.

“I thought he was very attractive, very funny, and he was good with kids,” she said. They started talking, then began dating, and married Nov. 23, 2019.

Chantelle said it was a tough decision to marry Jerrone – not that she didn’t love him, but that she knew he was seriously ill. “I was hoping and believing a miracle. Finally, I knew I couldn’t spend another day without him.”

The short marriage was bittersweet.

“Jerrone lived life to the fullest,” Chantelle said. “He was so giving. He would give the shirt off his back. He was ‘captain save the world.’ There was so much he wanted to do and there was so little time. He was a hero and inspiration to us all. He saw the light in other people.”

Jerrone was able to put his journey into words in a short video he did for the Resiliency Ohio project at Case Western University.

“I was tired of just going in a circle, feeling let down. I just said, ‘I’m gonna make it and be somebody.’ I didn’t want to be a statistic.”

Going into foster care at four years old, he matured quickly, Jerrone said. “I told myself I’m not going to let this hold me down, let foster care hold me down. Believe in something. Have a dream. And just stay focused on something “

Jerrone was born in Pontiac, Michigan, but grew up bouncing between the homes of relatives and foster care. Along the way, he dealt with abuse, mental health issues, homelessness and the disease that would eventual steal his life. Through it all, he persevered, and was a shoulder for others to lean upon.

Nashawn Lariviere, 25, first met Jerrone at a youth leadership camp about a dozen years ago. “Jerrone was the kind of person that if you just him it was like you had known him for years.”

Much like Chadwick Boseman, the star of Black Panther made movies for five years while dealing with cancer, Jerrone never let his illness stop him from living his life and helping others. “He could be in a lot of pain, participate and go lay on a heating pad for a couple hours, then come right back out,” Nashawn said. “You would never know he had that sickness.”

As an orphan himself, Nashawn said he felt like Jerrone was his brother.

“Imagine looking for your road that you need to go home. It’s a long, dark street. There’s a light, one street light. And you see it and you see the street and say, ‘Oh, I’m not lost.’ That’s what it was like knowing Jerrone.”

Despite an insurmountable amount of adversity and challenges, Jerrone never lost his faith or compassion for others.  He joined the COHHIO Youth Empowerment Program at age 14 and developed a strong passion and voice for advocating for others.

Jerrone was a founding member of the NAMI Ohio YouthMOVE chapter and became a strong advocate for mental health as well as homelessness and improving the foster care systems.  While he struggled with his own challenges related to depression and PTSD, he never let anything keep him from participating in advocacy.  He was a featured speaker at the YouthMOVE Resiliency Ring and many state and regional conferences.

Jerrone was a fierce supporter of the work of NAMI Ohio and was particularly interested in helping break stereotypes and stigma regarding mental health in the African-American community.  He often shared his personal story to help inspire resiliency and was a peer supporter and mentor to many new advocates.

John Dellick, 26, another friend of Jerrone’s who is a senior at Cleveland

State University, met Jerrone through YouthMOVE. He often picked up Jerrone in Akron for trips to YouthMOVE meetings in Columbus. Jerrone never complained about his illness or the pain he was in, Dellick said. “He was definitely a soldier. He was constantly in and out of the hospital. But he didn’t let it overflow onto other people.”

“Talking to Jerrone always inspired me,” John said. “I believe every life has a purpose. Although Jerrone’s life was not as long as I would have hoped or he would have hoped, he never wasted a second of it.”