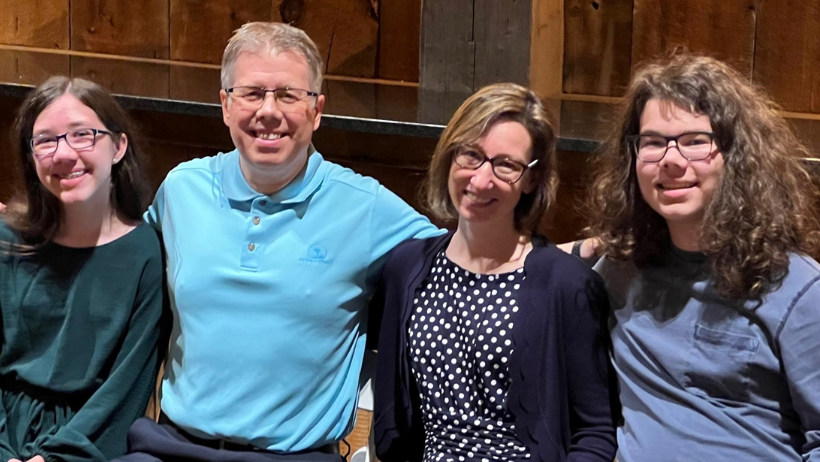 Mental illness is a mean disease.

It can come unexpectedly, hide in plain sight, and cause unbearable grief.

Kristin Jonsson knows that grief first-hand. She has suffered every day of the two years since Kristine, her smart, kind, artistic, sensitive and beautiful daughter, took her own life at the age of 16.

Katherine, Kristine’s younger sister, knows the mean disease, too. “When I first found out, I was in shock,” she said. “I didn’t fully understand what had happened.”

That’s where the story ends for too many people who have lost a loved one to suicide. They simply go on grieving.

But not this story. Not for Kristin and Steinn, her husband, or for Katherine and her brother, Daniel. Not for a family determined to make Kristine’s life stand for something beyond how it ended,

“I don’t want other families to go through the pain my family is living through,” said Katherine, now 12. “I want people to know that it’s ok to not be okay, and that it’s important to reach out for help.”

With Katherine taking the lead, the family participated in the annual NAMI Walk sponsored by NAMI Franklin County. Katherine raised $2,223 as part of Team Kristine which raised $4,573. Both figures were tops in the Franklin County event which collectively brought in $68,043.

Katherine and her family were honored with awards at the NAMI Franklin County annual meeting on Oct. 5th at the Wells Barn at the Franklin Park Conservatory. Katherine received the Youth Advocate of the Year Award, and the family was recognized for being the top walk fundraisers.

The Jonssons received not one but two standing ovations.

It was just two years ago, in the midst of the isolation of the COVID19 epidemic, that Kristine shocked her family by ending her life.

“We weren’t remotely prepared,” said the girl’s mother. “None of this was on our radar. To outside appearance, she was happy and doing better. We know now that she clearly had depression, but it wasn’t the stereotype that people think of. We were blindsided.”

Kristine did not threaten suicide, but she left her family letters to be read after she was gone explaining her struggle with depression and anxiety. “She knew she could have asked for help, but she didn’t. Mental health in our family wasn’t a stigma. I have a history of depression and anxiety and she knew that,” Kristin said. “I don’t know why she felt she had to hide it. I don’t know if it was because of the pressure from the outside and the society we live in that does not treat people with mental illness well.”

Kristin met her future husband, Steinn (friends call him Stan because his name in Icelandic is too hard to pronounce) when they were both working in California. After they married, and with Kristine, their first-born on the way, they moved to Ohio, where Kristin is from. Stan is from Iceland. The couple and their two children, Kristine and Daniel, lived in Iceland for three years before returning to Columbus. It was there, in the land of fire and ice, that Katherine was born. She has dual citizenship in the U.S. and Iceland.

The couple noticed that Kristine, their first child, was struggling.

Kristine was a “cuddly and sweet baby,” but “was never good at sleeping” and had a difficult time when separated from her family members. “We noticed when she was three and we put her in pre-school for the first time, she cried and cried,” Kristin said. “That’s normal at first but she never got past it.”

By age 6, Kristine had been diagnosed with both separation anxiety and sensory integration disorder, which made her extremely sensitive to being touched and wearing certain kinds of clothes. Coupled with the sleep disorder, the young girl was dealing with “a trifecta of issues,” her mother said, made more difficult by the upheaval of the family’s move to Iceland and back to Ohio three years later.

To appease Kristine when they returned to Columbus, her parents got her a cockatiel which the family named Rainbow. The bird was special to Kristine, her baby. She trained Rainbow to wear a leash so she could take him on walks perched on her shoulder. She enthusiastically introduced him to people she met.

The Jonssons sought help for their daughter, getting her counseling, occupational therapy, and medication. It all seemed to help. By the time Kristine was 12, she was doing well academically in school, had made many friends, and was liked by her teachers. She was a talented artist, producing dozens of drawings and paintings.

“After 12, what we think happened is she started to hide it,” her mother said. “We thought she was doing better. She wasn’t crying anymore. She had all these friends. She took these advanced classes because she wanted to. We didn’t push her…. We thought she was a teenager forming her own identity.”

But inside, things were different.

“There was this disconnect between how she appeared on the outside to everyone, including us, and what was going on the inside.”

“We do everything to make our home as welcoming and gentle and kind and loving as we possibly can, but we still live in society,” Kristin said. “We can’t control those outside influences. I know kids in high school joke about suicide. They joke about mental illness. Inside my heart, I wonder if she didn’t reach out for help because she heard it from other people.”

There was a six-year age difference between Kristine and Katherine, but they enjoyed being together, drawing, doing arts and crafts, listening to music, or reading side by side. Kristine introduced her sister to some of her favorite books, including Harry Potter and the Wings of Fire series.

“She was kind and funny and could be sarcastic, too,” Katherine said. “We were very close.”

When she lost her sister, Katherine was overwhelmed with emotion, sad and confused, but also somehow feeling guilty that she should have known Kristine was so troubled. “I know that I couldn’t have done something. But I feel like I should have.”

Finding NAMI broke through the gloom of grief and sadness for the Jonsson family. Kristin read about the NAMI, the largest grassroots group in the nation dedicated to help those with mental illness and their families, and decided to investigate.

“I thought it was awesome that there are people that can form an organization and make things better about mental illness,” Katherine added.

Kristin embraced NAMI’s mission of ending stigma about mental illness, something she felt acutely when she lost her daughter.

“People treated her passing differently than they treat it when someone dies like in a car accident, for example. There was some blame and some stigma and an unwillingness to even acknowledge that she existed. It was very hard for me.”

Asked how she thought her big sister would feel about the fundraising and work she’s done to raise awareness about mental illness, Katherine paused and said through tears, “I think she would be a little shocked, but she would be impressed and proud of me.”

Katherine says the ordeal has inspired her to think about becoming a teacher and help future generations of kids overcome the stigma that may have contributed to losing her sister.

Kristin likewise thinks her oldest child “would be very proud of Katherine. She would look down and give her a big hug.”