The Thompson Family and PAC 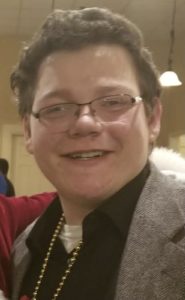 Duane Thompson was at his wit’s end with his daughter, whose chronic behavioral health problems culminated when she came at him with a knife.

“It makes you feel angry at times,” the Cincinnati father said. “Sometimes I go to work and sit there and tear up. And say “Why?”

Diane Thompson of East Liverpool, OH., was running out of options in taking care of her two grandchildren, including Leon, 18, who suffered a tumor on his optic nerve that cost him the sight in one eye.

“I was treading water” she said. “The government and Social Security won’t tell you about benefits and how to work with the system. If you don’t know how to do it, nobody tells you how.”

Sharon M. was having trouble getting Cincinnati school personnel to understand how her 11-year-old son’s attention deficit disorder and speech impediment were hampering his education.

“I realized I needed someone who knew the laws. Since I’ve been speaking about the laws, there’s a different respect at the table.”

These three different parent dilemmas have a common denominator – all have been helped by the Parent Advocacy Connection Program (PAC) operated by the National Alliance on Mental Illness Ohio. As part of the program, parents who have lived experience provide training and support to assist families involved in the child-serving systems of care in Ohio. PAC advocates use their experience with their own children to support families with what they need to help their children get services and support so that they can grow and thrive into adulthood.  In addition to aiding parents in connecting their children to services, they guide them so they can move forward to advocate for themselves.  Having a PAC advocate at the table with a family can help create a cultural shift as families are humanized and seen as capable and able to be there for their children.  PAC advocates problem solve, collaborate and support.  Most importantly, they listen, guide and support so that families they serve can become meaningful decision makers in their child’s life.

Duane Thompson and his wife, Flametta, have been dealing with their daughter Rodnetta’s issues since she was diagnosed as a child with autism spectrum and cognitive issues, bi-polar disorder, and aggressive behavior. “It’s a constant thing,” he said. Her aggressive behavior comes and goes, but occasionally she must be restrained, Duane said, relating when his daughter threatened him with a knife. It scared him and made him sad at the same time.

The light at the end of the tunnel showed when Duane’s brother referred him to NAMI Ohio. “We were having such a hard time getting her services, but my parent advocate helped me with connections,” he said. “If I have a question or I’m not real comfortable, she would help me with advice. She is the reason my daughter is getting help.”

With the help of a local agency, Duane’s daughter is how receiving medication, counseling, help with social skills, and may soon move into her own apartment.

“Meeting after meeting, NAMI was there,” Duane said. “They let you know the things you should know. I won’t have a meeting about my daughter without them.”

Diane Goodwin, at 52, finds herself in the position of many grandparents these days in raising her two grandchildren, Leon Daughtery II, 18, and Laila Powell, 6. They lives in Columbia County, a part of Ohio where there are limited services for people with health and mental health issues.

Diane began taking care of Leon and Laila because of the drug addiction of their mother, who has since passed away. “I want my kids to stay within the family,” she said.
“I want to know in my heart that they are safe and grow up right. I had to step up to the plate.”

But the job was much harder, and far more costly, than Diane anticipated, especially when Leon developed a tumor on his optic nerve that eventually cost him the sight of one eye and tunnel vision in the other. At one point, his condition was so serious he was given four months to live.

But Diane’s NAMI parent advocate helped her navigate the Social Security disability system and other programs to get Leon the help he needed, including multiple surgeries. Now, he’s hopeful of going to college to study engineering at West Virginia University.

Diane has used her new-found knowledge of help systems to get Chromebook computers for Laila’s school, she said proudly. “The word is out there, but nobody knows about it.”

“NAMI was great,” she said. “I wish people could see it first-hand.”

Sharon’s son has autistism and has struggled academically, especially with the advent of home learning that came with the COVID-19 pandemic.  While he had an Individualized Education Program and a classroom attendant in Cincinnati Public Schools, that fell by the wayside when the pandemic forced schools to close. She has been working hard to make sure her son has what he needs to be successful in the academic setting.

Sharon met with NAMI and school personnel to work out special programming for him. “Parent advocates are very important,” she said. “Having an advocate who knows the laws and the changes makes them take you seriously. You are a parent who is aware.” Sharon said she was painfully aware that African-American males face additional pressures and problems in school. “At the end of the day, I realized I needed someone who knew the laws. Now there’s a different respect at the table” when she meets with educators.

“If you don’t know the law,” Sharon said, “you don’t win for your child. My child’s future is important. NAMI is definitely needed who those who value their child’s future.”

NAMI Ohio has about 40 parent advocates around the state, but is seeking more to meet the needs of parents and children. For those interested, and who have experience in the child-caring system, NAMI will provide free training and access to all necessary materials. PAC parents receive a financial stipend for their work with individual families. Additional compensation is offered to those who wish to advance to be regional PAC coordinators.

For more information on PAC, email Dana Berryman at dana@nami.org, Jody Demo-Hodgins at jody@nami.org, or call NAMI Ohio at 614 224-2700.