Get to Know Jody 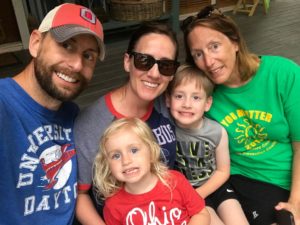 Mr. Rogers would have liked Jody Demo-Hodgins because she’s a helper.

Rogers, the long-time television host of Mister Rogers Neighborhood, frequently told kids, “Look for the helpers. You can always find people who are helping.”

That description perfectly fits Jody, Director of the Children’s Division for the National Alliance on Mental Illness Ohio. A social worker by profession, she previously was with the Crawford-Marion Board of Alcohol, Drug Addiction, and Mental Health Services, including 19 years as executive director.

“I believe empathy is one of the most important things that we need to have,” Jody said. “We still have so much stigma about mental illness. There is so much hurt in the world that we can do something about.”

“We need to better educate people and have discussions so we can make mental health care part of overall health care,” Jody said. “Our brain is part of our body.”

Bev Young, the now-retired former director of the Marion Area Counseling Center, worked with Jody for many years as a non-profit community mental health services agency. “What I admire the most about Jody is she is genuinely so compassionate about providing services and meeting the needs of people with severe and persistent mental illness,” Bev said. “She was so honest and helpful in brainstorming new approaches, and being creative and innovative in trying to provide services in our area.”

Jody was born in Malone in upstate New York just about 10 miles from Canada. Her mother, Hilda, was a nurse, and her father, Ed, was a trainer and driver of harness-race horses. Her father’s occupation resulted in many moves as he followed the racetrack circuit. As a result, Jody didn’t finish the year in the same school where she started until she was a freshman at Trinity College in Burlington, VT.

She met her future husband, Jim, when both were working at a horse track. They married moved to Marion, Ohio, in 1979, and have lived there ever since. They have two children, both of whom are in the mental health field.

Jody said she once aspired to be a special education teacher, but eventually decided that working with people who had mental health and substance abuse issues was her calling. Those touched her personal life since her mother struggled with alcoholism and her sister had mental health problems and took her own life.

After starting her career with what is now Job and Family Services, Jody worked in a program counseling young mothers before taking a job in 1989 as associate director of the Crawford-Marion Board of Alcohol, Drug Addiction, and Mental Health Services. She became executive director in 1997, a position she held until her retirement in 2016.

Since joining NAMI Ohio, Jody has directed a wide variety of programs focusing on providing mental health services for children and support for their parents.

She said mental health services in Ohio have improved but the state “never fulfilled its promise” about what it intended to do once state psychiatric hospital closed. The waves of substance abuse problems, including overdose deaths, required agencies to focus time and scarce resources there. “It took our eyes off mental health needs, Jody said, ‘but the good thing is we’ve had a lot more discussion about addiction and underlying mental health issues.”

Information about NAMI Ohio and programs for children are available online at https://namiohio.org/programs/