CURRENT NAMI OHIO BOARD CHAIR, JOYCE A. CAMPBELL ELECTED PRESIDENT OF THE NAMI NATIONAL BOARD OF DIRECTORS 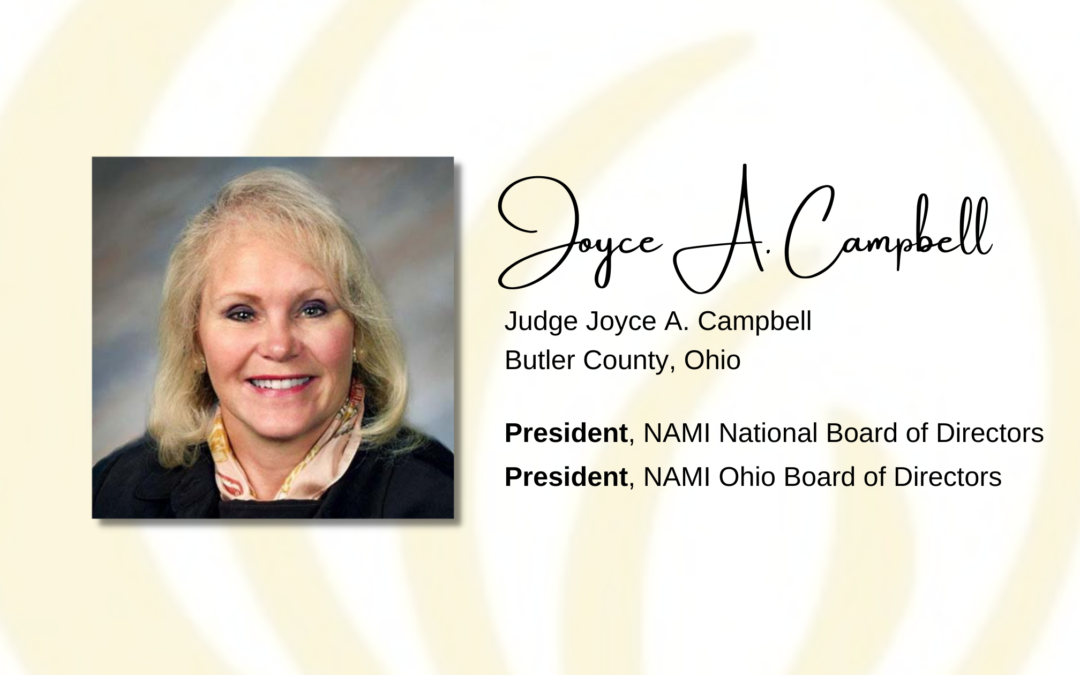 COLUMBUS,OH: NAMI Ohio congratulates Judge Joyce A. Campbell for her election as President of the National NAMI Board of Directors.

Judge Campbell’s election was announced Saturday at the conclusion of the NAMI National Conference. She was previously first vice president of the organization. NAMI is the largest advocacy organization for mental health in the Country, working with the Administration, Congress, Governors, and State Legislators in molding policies that impact those citizens in our Country dealing with mental health issues.

Terry Russell, Executive Director of NAMI Ohio, said, “Judge Campbell’s commitment and heart-felt compassion toward those we serve is unmatched. Her understanding of the needs of individuals with mental illness and their families, combined with the skills and experience to lead, will only benefit NAMI as the largest grassroots organization representing those most in need.

Judge Campbell has been on the bench of the Fairfield Municipal Court since 1999. She was one of the first judges in Ohio to establish a specialized mental health court. Judge Campbell created the “Treatment Alternative Court” program in January 2001. It is a specialized docket court, certified by the Ohio Supreme Court, which addresses underlying mental health issues in criminal cases while still holding participants accountable for their actions.

Russell also stated, “Judge Campbell’s leadership at NAMI Ohio will continue. Now she will be able to bring a local voice to advocate to the national mental health system that has allowed far too many people to wander the countryside, languishing in jails, homeless shelters, and substandard housing.”

Judge Campbell has been active with NAMI for the past 20 years, beginning with her home base in Butler County. She has also been a leader on the Ohio Suicide Prevention Foundation board.

At weekly hearings in her court, Judge Campbell invites NAMI representatives to support people with mental illness who find themselves in the criminal justice system. She is often able to divert people to proper treatment as opposed to jail confinement.

Judge Campbell is also Chairperson of the Ohio Judicial Conference and sits on the Ohio Supreme Court Commission on Specialized Dockets.

She previously served as a prosecutor, a trial attorney, an arbitrator and mediator, and a police professional. Judge Campbell received her Bachelor of Arts Degree in Psychology and Sociology from Case Western Reserve University and her Law Degree from the Case Western University School of Law.

NAMI Ohio’s Board of Directors, Staff and Statewide NAMI Affiliates, and most importantly, Ohio’s citizens living with mental illness and their families are extremely proud of Judge Campbell’s recent election. It is comforting to know we now have a leader’s voice in Washington, D.C.