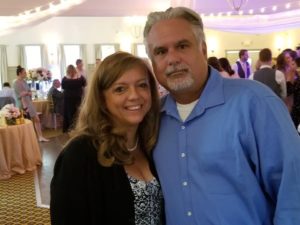 The first time she left home, Angela Patterson Lariviere had nothing but a small suitcase, a baby doll, and 25 cents for the bus. She was 12.

A quarter wasn’t enough to get her to her destination, Westland Mall in Columbus, so Angela sat quietly on the bus until the driver, feeling sorry for his lonely little rider, gave her a bus pass to finish the trip.

Fleeing from problems at home, Angela ended up with relatives that night, one of dozens of times she bounced around from place to place on a life’s journey that led to her role today as a wife, mother to four, and over the years caregiver to another 23 children, and now YouthMOVE director for the National Alliance on Mental Illness Ohio. YouthMove is a statewide youth-led organization devoted to improving services and systems to support youth inclusion, mental wellness, positive supports and healthy transition and support out of foster care.

Angela, at 48, has lived more places, experienced more trauma, and learned more lessons than most people do in a lifetime. Through it all, she remains remarkably resilient with boundless energy to keep fighting for children, her own and hundreds of others. Angela credits her mother with giving her a strong foundation in faith to her through the hard times.

“I am passionate about the work I do because I’ve been there but I don’t pretend to know someone else’s journey,” Angela said.” I support youth because I know they are all strong and resilient even if they don’t believe it.  I teach them to advocate for themselves, become leaders, and work together to improve and strengthen communities.”

Erin Cordle, associate director of the Office for Social Concerns for the Roman Catholic Diocese of Columbus, calls Angela “One of the most amazing young women I’ve ever known…Angela thinks outside the box. I’m not sure she even sees the box.”

Cordle added, “The genius of her life is that she’s taken her life experiences, which have been vast and at times horrific, and used them to understand kids today to help turn their circumstances into a brighter future.”

In 2002, Angela became the first Ohioan to receive the Cardinal Bernardin New Leadership Award, named after the former Chicago archbishop, which recognizes someone who has shown leadership in dealing with poverty, in her case homeless youth.

Many of the lessons Angela shares with youth come from her own troubled upbringing which including periods of homelessness, dozens of moves, and dealing with a step-father who at times forced his children to help package drugs he subsequently sold. Her mother had a life-strong struggle with mental health issues.

“We were super-poor but we were stable for the first few years,” she said. “We had a good education, and went to school every day and to church on Sunday. She was a great, great mom and took great care of us until she became too ill.”

Angela was frequently called upon to take care of her younger sister and brother. She took them to the doctor, did the grocery shopping, stood in line for food stamps, and lied about her age so she could work at Wendy’s when she was 13. 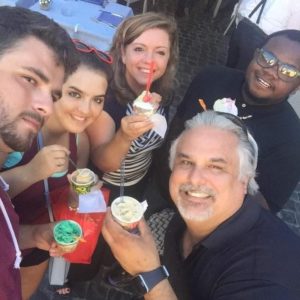 She met her future husband, Charlies Lariviere, when she was 16 and it was “100 percent love at first sight.” They married four years later.

She first worked for AmeriCorps and later worked for The Coalition on Homelessness and Housing in Ohio where she created the Youth Empowerment Program, a statewide council of homeless young people. She also worked with then-Senator Mike DeWine on programs for homeless youth, and with Bill Faith, head of the Coalition for Homelessness and Housing in Ohio.

“She was always very committed to that cause,” Faith said. “She was very hands-on and did a lot of good work.” He said homeless youth are “a kind of forgotten population” who receive little attention and help because they are often on their own and no longer part of a family.

Angela joined NAMI Ohio in 2017 where she continues to use her experience and energy to help young people achieve their goals. “I feel like everybody should get a shot at having opportunities to be successful and be happy. I’ve been an advocate for people my entire life.”